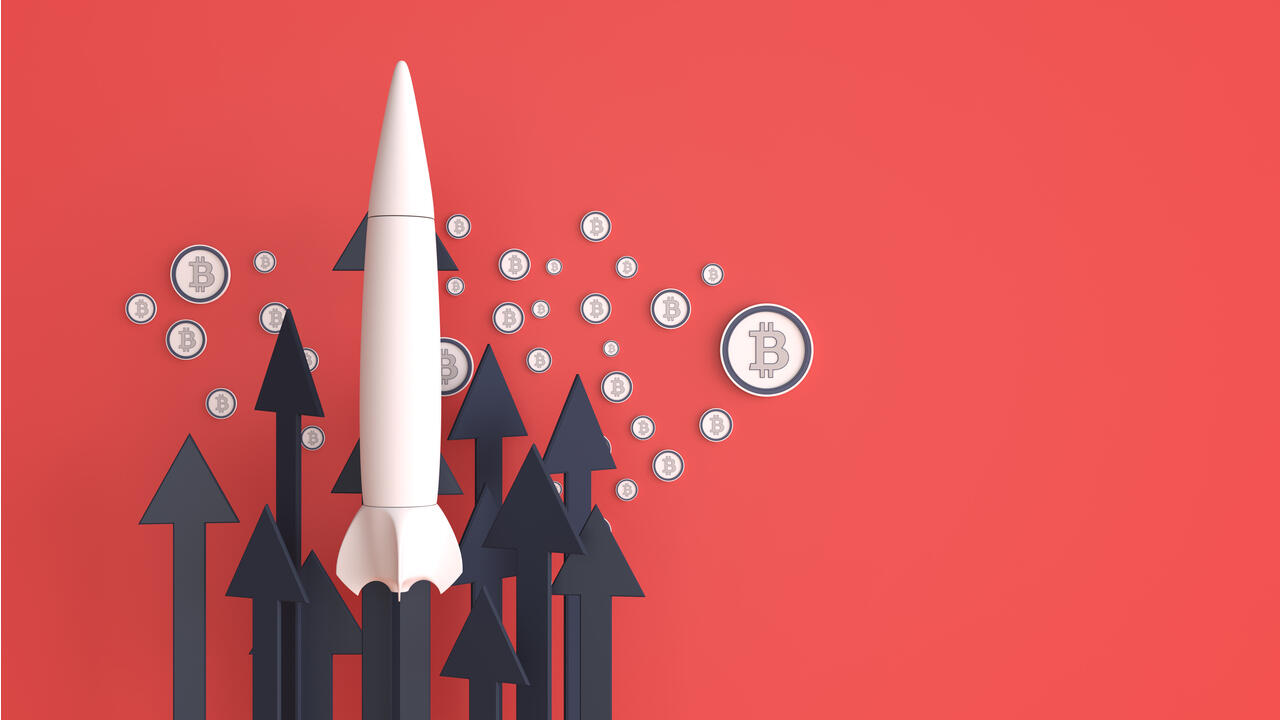 Bitcoin: Which Path Will Crypto Take To The Moon?

Jason Appel is the Co-lead of Crypto Waves on Seeking Alpha and the Staff Beginners Guide at ElliottWaveTrader. He is a financial markets veteran who started his career on the trading floor of the Chicago Board of Trade in the early 2000s working as a top pit clerk for a high-volume broker. He has traded futures since 2004 and caught the crypto bug in early 2017. 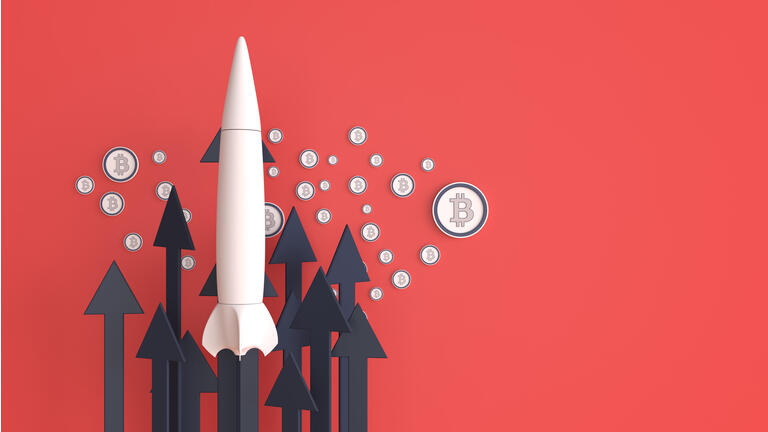 Produced by Jason Appel with Ryan Wilday and Avi Gilburt

What a month October has been! A few key developments in crypto trading include the launch of BITO, the first Bitcoin Futures ETF approved for trading in the US. Additionally, the CME has announced plans to list a micro Ethereum futures contract. These developments continue to signal greater adoption and acceptance of cryptocurrencies in the investment community.

In my more recent article from early October, I explored in detail the most likely black path quoted from my September article:

“Black Count: In this count, we consider the prospect that the lows are in. Pullbacks are buying opportunities. Based on the low and high of the rally structure in question, our first region to watch ranges from approximately $36k-$42k. Should price form a symmetrical 3 wave move from the September 6th high into the aforementioned region and strongly bounce, we will have some additional evidence that the decline is complete and price is on its way to $100k+. Confirmation of this count displayed in black notation will ultimately confirm by price maintaining above $36k and breaking out above the September 6th high. Alternatively, should the price make a sustained break below the $33,600 region, we have a strong signal that lower lows are incoming.”

Black count: Price has followed this path almost to perfection since the publication of the September article. The drop landed right in the middle of the support region and has now rallied nearly all the way back to the September high.

Let’s take a look at the action on a smaller time-frame operating from the black count.

BTC has formed a 3 wave rally from the 9/21 low, and while the action has been very bullish, the black count has yet to prove that any moves sub $40k (before reaching $100k) are in hindsight.

In order to prove that price is very unlikely to breach the 9/21 low, the first two conditions are:

Bitcoin has now resoundingly fulfilled both conditions necessary to establish that the highest likelihood outcome is that the price has struck a lasting bottom at the 9/21 low and should not be breached at any point en route to $100k+."

Now that we’ve established a secondary low and rallied back to the all-time highs, let’s look at two potential paths BTC may take to $100k.

Regarding the forthcoming analysis, please see the charts below and the accompanying video, which walks through analysis in video format: Which Path Will Crypto Take to The Moon (video).

The black path (Updated): Following from previous updates, BTC established the first 5 up into the September high, labeled wave circle i, and off the 9/21 low we have another big rally, which has satisfied the conditions for 5 up for wave (i) but strongly exceeded the upper end of the target region without a clear wave (ii) pullback. Presented below in black is the potential that wave (i) completed into the October 11th high, but delivered only a paltry pullback into Oct. 12. From there, we have another 5 wave move for a smaller degree wave i into the October high. This count is very accelerated and portends a massive upside resolution to this recent consolidation off the 10/20 high. In order for this count to remain viable, BTC’s price must remain above the October 12th low at all times.

In order for this to remain likely:

2) BTC’s next move into new all-time highs should produce a very strong rally and bring price up to $80k very directly with minimal pullbacks.

Ultimately, should both of these conditions be met, odds will favor BTC to target $130k+ on this cycle with a reasonable chance for $160k and an outside possibility of $186k.

The blue path: As mentioned in the accompanying video from the September article, regarding the formerly tracked purple count, it’s possible to view the initial rally into the September high as a 3 wave move. Given the new all-time highs it’s unlikely that we’re seeing a corrective rally here, but this possibility for an initial 3 wave start could be signaling that price will complete the final 5th wave off the 2020 low as an ending diagonal. An ending diagonal is defined in Elliott Wave analysis as a 5 wave motive trending structure in which each wave is composed of 3 subwaves. The salient characteristic of the diagonal is that it tends to be a more overlapping and less strong move than a standard impulse, and it also has a tendency to top at lower extensions based on the initial waves i and ii. Note: We can reasonably consider the initial rally into the September high as a 3 wave move and off the September 21st low, we have a pretty direct move to the .764 extension of the circle i-ii. Whereas the first wave off of a standard impulsive circle i-ii targets the .382-.618 extension for wave (i) (with waves (ii)-(iii)-(iv)-(v) to come) in a diagonal, after the circle i-ii, the typical extension for the (A) of circle iii is the .764 extension, which is what we have here.

Given the larger potential of the black count, we’ll continue to track that as the operative count (or primary count in Elliott Wave speak) until it becomes unlikely. However, the blue count seems quite reasonable and aligns with larger degree expectations as well.

In the larger structure, the 2.0 extension off the 2020 lows comes in at $102,800 (this varies depending on exchange). First, that’s the standard target for wave 5. Second, wave 3 topped at the 1.618 extension and wave 4 bottomed just beneath the 1.0 extension. Especially given those details, expectations are even stronger for wave 5 to target the 2.0 extension. Within a diagonal, our expected target for the wave v is the 1.618-1.764 extensions of the initial i-ii. Those extensions off the summer lows are $103,100 and $112.400 respectively. Clearly they align quite well with the larger degree expectations for wave 5.

Lastly, though I don’t foresee any strong bearish potentials at this time, I would be remiss not to mention that a break below $44k potentially compromises (though does not invalidate) the blue count and indicates a likely retest of the late September low, $39.6k~. Breaking $39.6k resoundingly invalidates the blue count and should that occur, it opens the door to price testing and/or breaking the summer lows to finally test the $24k region we were looking for in July.

BTC’s two prospective paths from the Summer low up to $100k-plus. 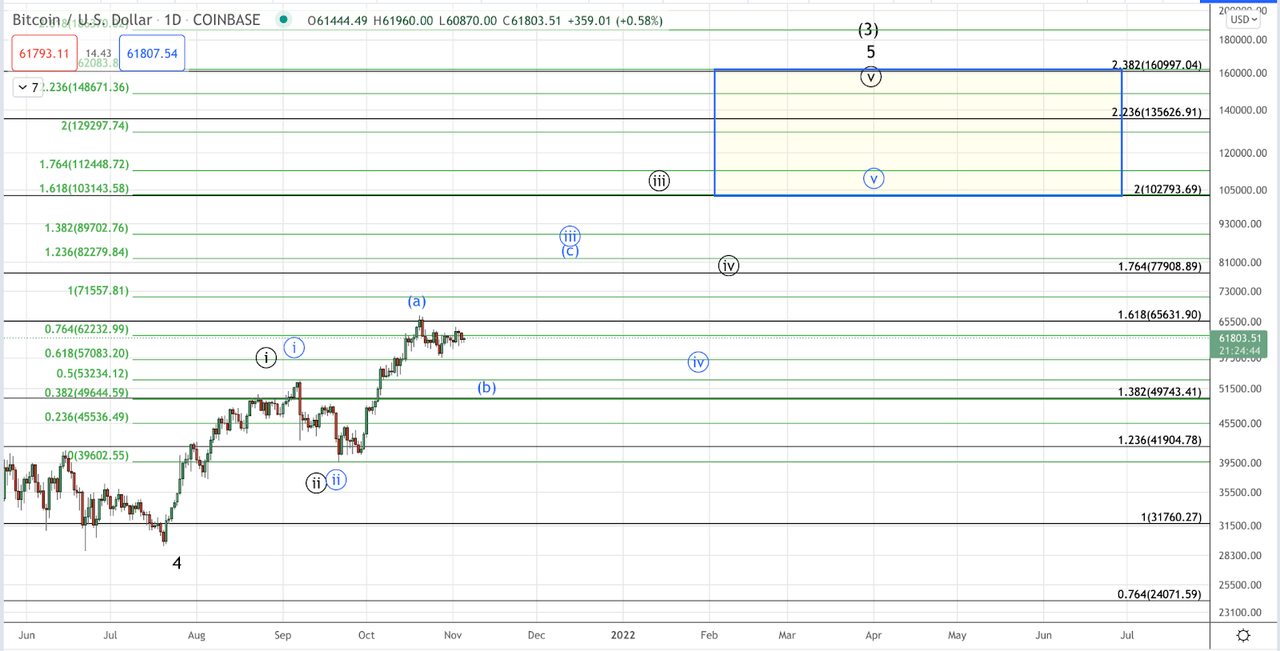 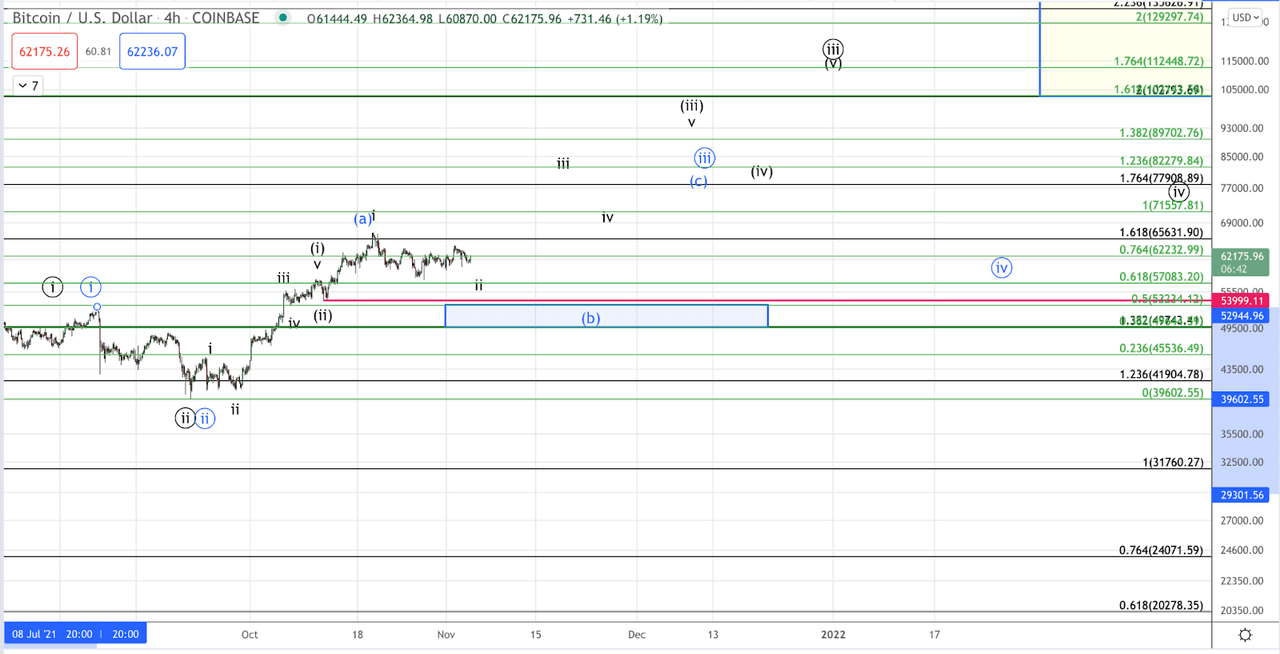 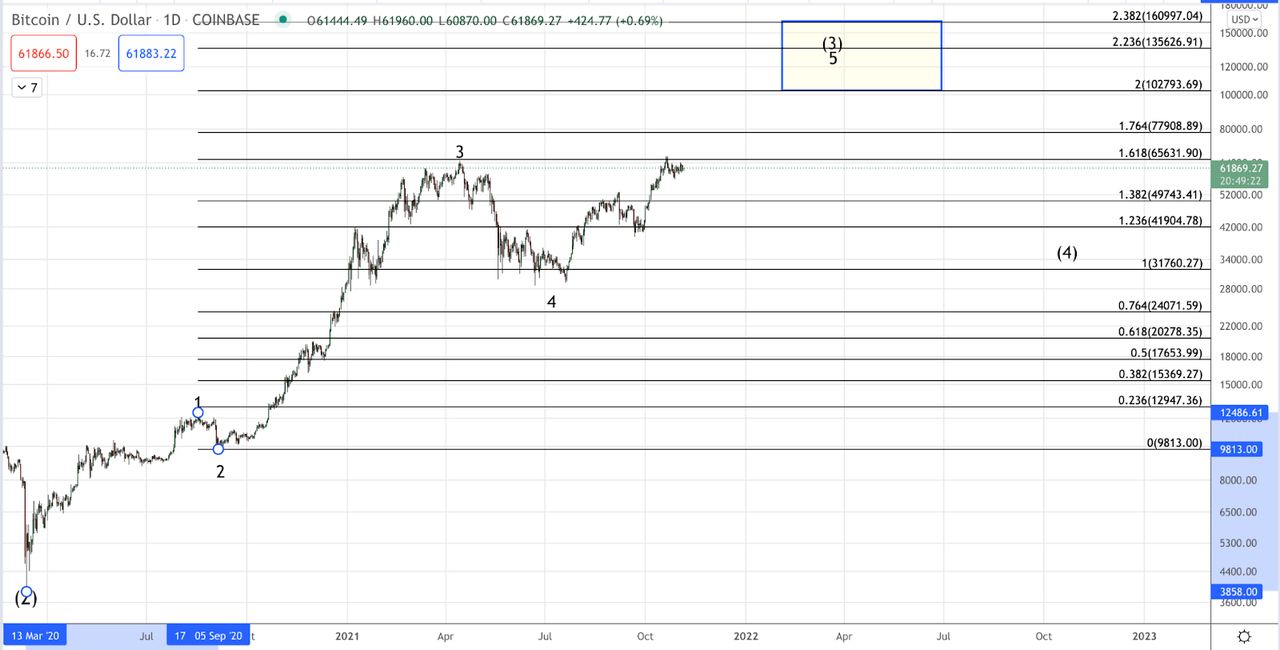 Profit from our coverage of 20+ cryptocurrencies and crypto stocks ... based on our unique strategy for surfing volatility!

"Ryan's tactics have made the difference for me ... when to enter and when to update stops - invaluable."

"Been in your service for most part of 2 years...Really value your work :)"

"Gotta love this service, none better."

This article was written by

The 'Must Have' Service For Cryptocurrency Traders!

Jason Appel is the Co-lead of Crypto Waves on Seeking Alpha and the Staff Beginners Guide at ElliottWaveTrader. He is a financial markets veteran who started his career on the trading floor of the Chicago Board of Trade in the early 2000s working as a top pit clerk for a high-volume broker. He has traded futures since 2004 and caught the crypto bug in early 2017.

Disclosure: I/we have a beneficial long position in the shares of BTC-USD, ETH-USD either through stock ownership, options, or other derivatives. I wrote this article myself, and it expresses my own opinions. I am not receiving compensation for it. I have no business relationship with any company whose stock is mentioned in this article.