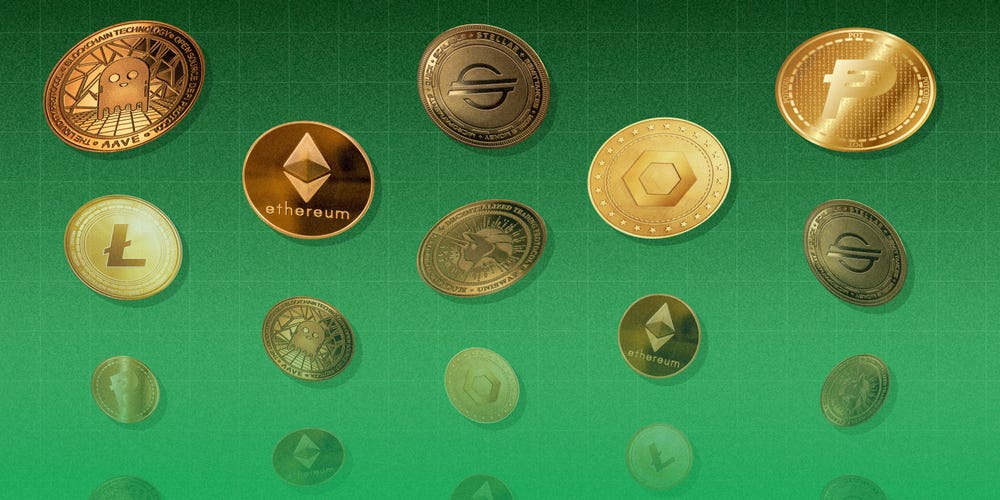 Since the emergence of Bitcoin, the concept of a decentralized, trustless peer-to-peer (P2P) payment network has inspired an entire class of digital assets. The crypto markets are a product of Bitcoin's success, and the fast-growing space consists of more than 9,000 altcoins.

Now we have altcoins, which began to emerge in 2011 in an attempt to reinvent Bitcoin, with their own rules and improvements on different features.

What is an altcoin?

Altcoin is a cryptocurrency alternative to Bitcoin — its name is a portmanteau of "alternative" and "coin." Since Bitcoin is widely regarded as the first of its kind, new cryptocurrencies developed after are viewed as alternative coins — or altcoins. The emergence of altcoins began around 2011, with the first generation formed using the same blockchain engine as Bitcoin.

The first altcoin was Namecoin, which is based on Bitcoin's code and was released in April 2011. Namecoin is integral to the history of altcoins in that it showed that there's enough room in the crypto markets for more than one kind of coin.

Blockchains today can run several hundreds of "altcoins," fueling similar currency projects with unique rules and mechanisms. Altcoins like Ethereum can provide developers with a toolkit and programming language to build decentralized applications into the blockchain.

The blockchain network is a distributed ledger that stores data like cryptocurrency transactions, NFT ownership, and decentralized finance (DeFi) smart contracts. This ledger is often referred to as a "chain" comprising "blocks" of data, which are used to verify new data before additional blocks can be added to the ledger.

This network, on which Bitcoin operates, is groundbreaking because it's a decentralized, trustless, P2P payment network that functions without a central authority or entity facilitating transactions. And altcoins function on the exact same premise as Bitcoin: to operate using this blockchain technology.

However, there have been some altcoins that have emerged to instead improve on the flaws of Bitcoin or to achieve some other goal. For example, Litecoin was designed by former Google engineer Charlie Lee as a "lite version of Bitcoin."

Here are the two key things to know about altcoins.

Altcoins are a highly speculative and volatile investment. Speculation is a powerful driver of the crypto markets so it's important to do your research before investing in any altcoin. Half-baked whims and trading based on rumors are exactly what the experts advise against.

"The altcoin space is full of innovation and change. There are some interesting projects, and always many new projects. You've got to be very well informed and somewhat cautious," says Shone Anstey, CEO of LQwD. "Before plunking down hard-earned money, you need to do the research. Who is the team behind it, especially on the engineering side? What problem are they solving? And who are the financial backers?"

The decentralized, intangible, and often misunderstood nature of cryptocurrencies in general makes predicting the long-term, steady success of an altcoin project difficult to predict. Some altcoins, like Ethereum, have maintained their position in the market through constant innovation and the strength of their community. Speculation has a more dramatic effect on newer altcoins. External factors like public perception, Bitcoin price fluctuation, or a meme on Reddit can oftentimes cause drastic price fluctuations.

While the crypto community stands united on its long-term bullish outlook for Bitcoin, the temptation of selling coins for short-term profits is built into the crypto zeitgeist. The crypto community created the term "hodl" in an effort to encourage people to hold on to their crypto assets for the long-term. "Hodl" means "hold on for dear life," and to resist the impulse of selling when the value of their crypto drops or rises.

The culprit for the tremendous costs of energy lies with the "proof of work" (PoW) consensus algorithm, which is how transactions are verified. And as Bitcoin mining has become more competitive, the computing power required to profitably mine new bitcoins is represented in factories loaded with servers all working toward solving the network's algorithms.

The PoW consensus mechanism is responsible for driving the competition for faster and more powerful computational processing power. The faster a miner's computer can complete the formula, the higher their odds of winning a block reward. Over time, miners have developed computer hardware with the sole function of processing the PoW consensus algorithm.

This has evolved from a miner running a program in the background of their PC to entire mining farms. Miners (or a pool of miners) will buy factories in countries where electricity is cheap and fill them with thousands of mining rigs. The energy required to keep the rigs running 24/7, combined with the fans and coolant systems to prevent overheating and fires, has made crypto mining an environmental disaster.

Over time, there have been many altcoins that have come along. And now, there are the main types:

While no altcoin has managed to "dethrone" Bitcoin in value, many projects have proved themselves worthy enough to a global community of investors and developers:

The implementation of smart contracts in the Ethereum blockchain has led to decentralized apps/games like Cryptokitties. Rachel Mendelson/Insider

The second-largest blockchain in crypto, Ethereum's evolution has taken it from an asset to an application. Founded by Vitalik Buterin in 2013, Ethereum is a distributed blockchain platform for smart contracts and dApps (decentralized applications). With its native token, ether (ETH), users can interact with the Ethereum platform. Ether can be traded on most crypto exchanges, used to pay transaction fees, or as collateral for ERC-20 tokens, which have DeFi utility.

Ethereum's integration with smart contracts via the Solidity programming language has distinguished the project from Bitcoin. A smart contract is a self-executing code that can run on the blockchain.

Chainlink is developed by a global community. Rachel Mendelson/Insider

Launched officially in 2019 on the Ethereum blockchain, Chainlink is a decentralized oracle network that's meant to expand on smart contracts. In a nutshell, it connects smart contracts with "off-chain" data and services. The network is built around the LINK network and token and has two parts: on-chain and off-chain.

Aave is the largest non-custodial lending DeFi protocol of its kind. Rachel Mendelson/Insider

The AAVE is an open-source DeFi lending protocol that allows anyone to loan or borrow crypto without an intermediary. As a lender, you can deposit funds — which are allocated into a smart contract — where you can earn interest based on how Aave is performing in the market. Making a deposit means you can also borrow by using your deposit as collateral.

Rebranded from ETHLend following a successful ICO in 2017, Aave switched from a decentralized P2P lending platform into a liquidity pool model. This means loans are acquired from a pool instead of an individual lender. Since 2020, the Aave Protocol has been an open-source and non-custodial liquidity DeFi protocol for earning interest on deposits and borrowing assets. Holders of AAVE can decide on the direction of the project by voting on and discussing proposals.

The Stellar Project was created in 2014 by Ripple co-founders Jed McCaleb and Joyce Kim. Rachel Mendelson/Insider

Stellar is an open-source payment network that doubles as a distributed intermediary blockchain for global financial systems, designed so all the world's financial systems can work together on a single network. Stellar began in 2014 when Ripple co-founder Jed McCaleb disagreed with the direction of the Ripple project. The ethos behind Stellar's development is to make international money transfers possible for the everyday person.

While Stellar is an open-source network for currencies and payments, Stellar Lumens (XLM) is the circulating native asset on the network. Stellar keeps its ledger in sync using its Stellar Consensus Protocol (SCP). Instead of relying on a miner network, SCP uses the Federated Byzantine Agreement algorithm, enabling faster transactions.

Uniswap pioneered the Automated Market Maker Model. Automated market makers (AMMs) are a type of decentralized exchange that rely on smart contracts to set the price of tokens. Rachel Mendelson/Insider

Uniswap is a decentralized exchange ecosystem built on the Ethereum blockchain. Launched in 2018, Uniswap uses an on-chain automated market maker. One of Uniswap's unique features is that anyone can be a market maker by depositing their assets into a pool and earning fees based on trading activity.

Uniswap uses an automated market maker protocol that executes trades according to a series of smart contracts. The smart contracts automate price discovery, allowing users to swap one token for another without an intermediary. In traditional finance, market makers are usually brokerage houses with incentives that can cause a conflict of interest.

There will never be more than 420 million PotCoins in circulation, a nod to 4/20 or what's known as "Weed Day." Rachel Mendelson/Insider

PotCoin is a Canadian-based digital currency that was launched in 2014 to allow consumers to buy and sell legal cannabis products. PotCoin was introduced as a solution for cannabis enthusiasts and the industry looking to legally transact at a time where banks were unable to do so.

PotCoin is an open source cryptocurrency forked from the Litecoin core. There are subtle changes to the PotCoin protocol including a shorter block generation time and the increased 420 million max supply of PotCoins. Potcoin switched from a Proof of Work mechanism to Proof of Stake in 2016 to make supporting the network more accessible and less harmful to the environment.

Litecoin is one of the most widely used altcoins in the market, helped by the fact that it has its own Visa card. Rachel Mendelson/Insider

One of the first-generation of altcoins made in 2011, Litecoin is a cryptocurrency based off of Bitcoin. Key things that distinguish Litecoin from Bitcoin include blocktime (four times faster block times than Bitcoin), supply (Litecoin has a max supply of 84 million while Bitcoin max supply of 21 million), its hashing algorithm, and distribution.

Dubbed the "digital silver" to Bitcoin's "digital gold," Litecoin's goal was to optimize the Litecoin asset while preserving the best parts of Bitcoin.

Altcoins have come a long way since 2011, and continue to prove themselves as more than just an "alternative to Bitcoin." The crypto space is a fast-moving and increasingly popular point of interest for investors. Thanks to the innovation and integration of crypto into mainstream business, people can safely and legally buy altcoins on their phone or computer.

Easy access to the crypto markets doesn't mean it isn't risky. Before investing in an altcoin, ask yourself: have you researched and performed enough due diligence? Would you be able to explain the project to your family or friends at the dinner table? Whether you want to trade altcoins full-time or just "hodl" onto your Bitcoin, the choice is yours. Listening to the experts, evaluating the risks, and assessing your financial goals are keys to investing responsibly.

Ryan Austin is a writer, researcher, and content strategist who specializes in crypto, blockchain, and FinTech. Based in New York, Ryan has a decade of experience working with investment research, financial services, and PR firms including Institutional Analyst, Inc. and Newswire.com. Today, Ryan consults with various agencies, crypto platforms, and FinTech companies.In addition to Insider, you can find his work on SeekingAlpha, OKEx, and Prime Trust. Outside of the office, Ryan enjoys walking with his dog, instigating his girlfriend, and Brazilian jiu-jitsu.  You can connect with Ryan on LinkedIn, or reach out to him directly at Ryan.Austin.Career@gmail.com.